How many times have you sat in an airplane and marveled at the mystery of a ponderous machine taking you aloft? What could possibly make this enormous device fly?  The answer is a complex series of events, but if one word had to be used to describe why an airplane flies, that word would be SHAPE.  The SHAPE of the airplane's wing, like the SHAPE of the bird's wing when moved through the air, causes lift. 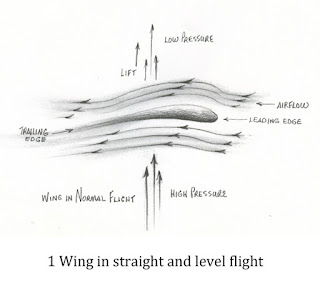 Drawing number 1 at right; note the leading edge of a wing's SHAPE is blunt and thick, which causes the moving wing to part the air more effectively.  The back or trailing edge of the wing thins dramatically to speed the wing through the air.

The SHAPE of the upper surface of the wing is more rounded and air moving over the top has more surface and distance to cover which creates low pressure.


The SHAPE of the underside of the wing is slightly concave and air has less distance to travel, therefore moving slower and causing high pressure. 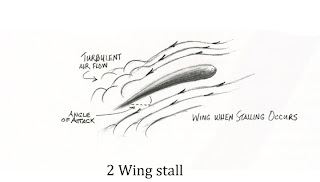 Drawing number 2 at right; if the wing is held at too high an angle of attack, the air cannot smoothly flow over the wing's surface.  An interruption or "burble" forms at the trailing edge of the wing, which causes loss of lift and the wing  stalls.

Airplanes and birds take off into or facing the wind because it expedites the air that must move over the wing surface to create lift.  They land into the wind as well because at slower landing speed, air must continue to move over the wing's surface.
The scientific term for the above is Bernoulli's Principle.

Why is all of this important to the bird sculptor.
In two words: pose and gesture.
Principles of flight and the SHAPES involved are the same for airplanes as they are for birds.

Below is a sculpture entitled Hay Bay.
Knowledge of the wing and aerodynamics create the illusion of descending flight. 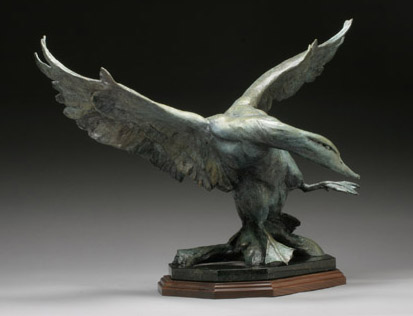 
All sculpture and drawings - copyright Sandy Scott
Posted by Sandy Scott at 06:07