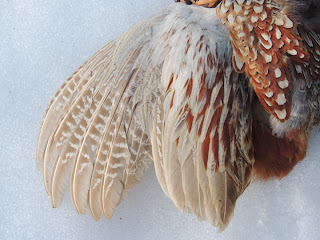 At right, is a picture of a pheasant wing,
partially folded.
Though a bird sculptor does not need to be a scientist, an
understanding of the important bones, joints, and muscles . . .
where they attach and how they articulate is a must.

In addition to this knowledge, the bird sculptor must know the major feather groups.  Birds in flight don't pose, therefore this understanding is a must.  The feather sets are basic and every bird has the same groupings; from the tiny hummingbird to the gigantic albatross.


Below is a drawing of a bird wing.  Wing flight feathers are divided into three groups:  Primaries, secondaries,
and tertials.  These groups are attached to what corresponds to the arm and hand of the human.

Most  birds have ten primaries and these feathers are attached to the "hand" part of the wing.  The primaries are individually controlled by muscles and are the propellers that provide thrust and move the bird through the air.

The secondaries are attached to the forearm region that corresponds to the human elbow and wrist.  They are not individually controlled and act more like an airplane wing providing lift.  Individual species have different numbers of secondaries:  perching birds have nine or ten, eagles have sixteen, and albatross have thirty-two. 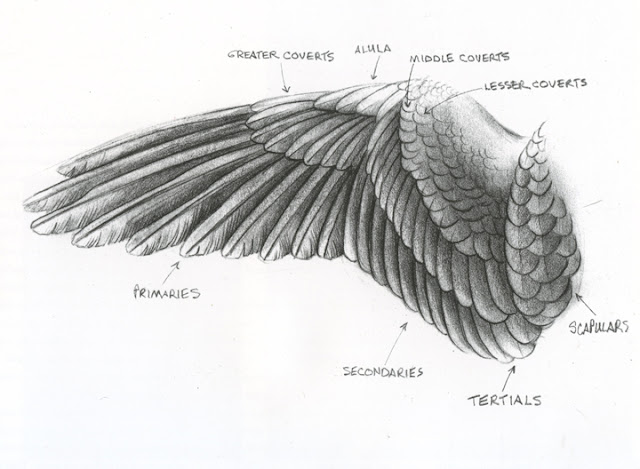 
Below, is a recent work entitled "After the Hunt Still Life"
The sculptor must know that a pheasant, like most birds, has ten primaries and that modeling
nine or eleven on the wing is as egregious as modeling four or six fingers on the human hand. 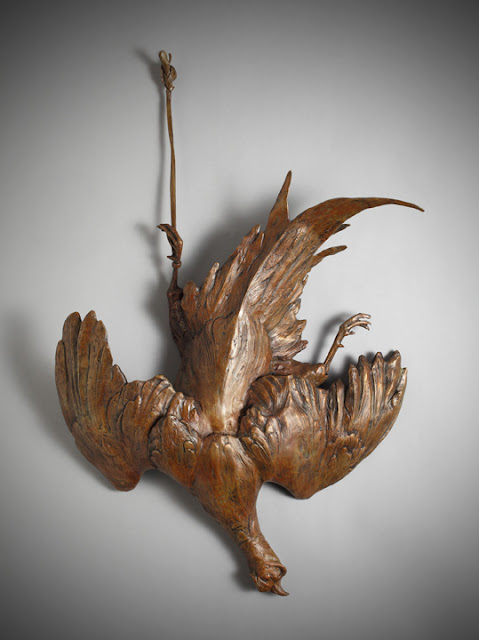